New Delhi: Deepika Singh Rajawat, the lawyer-activist who shot to fame after taking the case of Kathua rape and murder victim, is in the news yet again. A section of social media users is demanding the arrest of Rajawat, who posted a controversial cartoon on her Twitter handle on Monday night.

‘Irony,’ captioned Deepika Rajawat while posting the cartoon showing a man touching the feet of the deity during Navratri and the same man holding both the legs of a woman during the rest of the days.

As #Arrest_Deepika_Rajawat started trending on the microblogging website, Twitterati accused the lawyer of “shaming Hindu and their festivals”.

Here are some of the reactions: 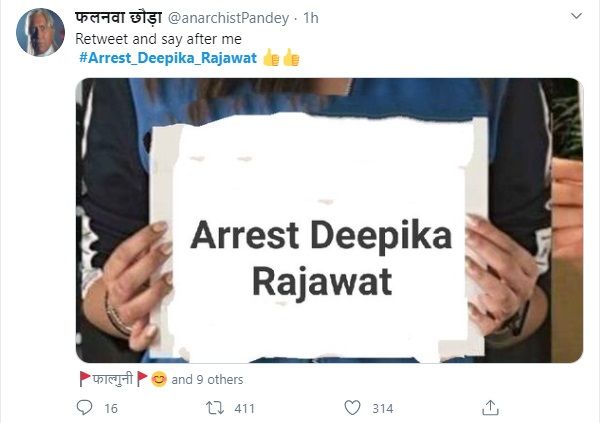 Who is Deepika Rajawat?

Based in Jammu, Deepika Singh Rajawat shot to limelight when she took up the rape and murder case of an eight-year-old girl in Kathua. During the case, Rajawat had even sought protection as she was purportedly receiving threats for representing the affected family. However, in November 2018, she was removed from the case in the trial court at Pathankot in Punjab on the basis of an application moved by the father of the eight-year-old victim.

The father cited her “apprehension and non-appearance” in the case as the reason behind his decision. It was reported that Rajawat appeared in the case only twice during more than 100 hearings in the case.

Responding to the development, Rajawat had tweeted: “I was there with them when no one was. Now since the rainy days have passed, they are winding up with me just because I could not regularly attend the trial which is taken care of by senior criminal lawyers. I don’t blame them. it is the human tendency which travels in genes.”