Longtime Wayne County Prosecutor Kym Worthy is facing perhaps her most serious re-election challenge from a newcomer in Detroit’s legal circles who has been endorsed by U.S. Sen. Bernie Sanders, the self-described democratic socialist.

Victoria Burton-Harris, a defense attorney who has represented clients in high-profile cases and calls herself a “people’s lawyer,” said she is challenging Worthy in the Aug. 4 Democratic primary in hopes of ending mass incarceration of African Americans and pursuing reform in the prosecution of Blacks in Wayne County.

The winner of next week’s contest will be assured of a four-year term, as no Republicans filed for the position.

Supporters highlight Worthy’s national leadership on the testing of rape kits and the creation of one of the country’s few conviction integrity units. Worthy, 63, also became the first prosecutor in the country to convict on-duty police officers of murder when she prosecuted officers Walter Budzyn and Larry Nevers for the November 1992 death of Detroiter Malice Green.

Burton-Harris, a resident of Grosse Pointe, has been a member of the legal services advisory committee for HAVEN of Oakland County and is on the new lawyers advisory board for the Institute of Continuing Legal Education and the board of directors for Covenant House Michigan, a youth homeless shelter, where she developed a mentoring program for residents, according to her campaign website.

Burton-Harris, 33, said that under Worthy, the office prosecutes African Americans “way more than they prosecute anyone else,” adding that the Wayne County jail population is predominantly Black.

Worthy counters that she doesn’t base prosecutions based on race.

“You have to make sure you are fair to everyone because you represent all of the citizens in Wayne County,” she said, adding that it would be “unfair, unjust and immoral” to base prosecutions on one’s race. 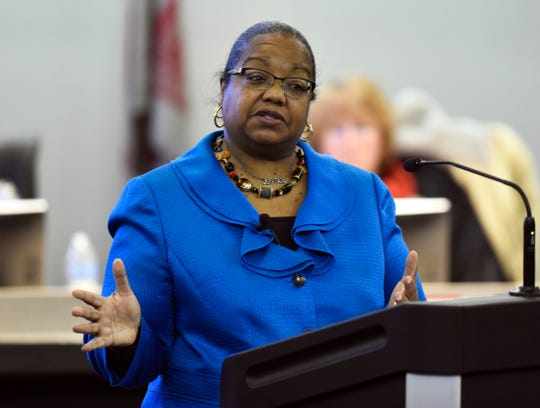 Worthy, who has been county prosecutor since 2004, said her office has been at the forefront of innovative crime-fighting programs and initiatives, including diversionary programs offered to 18,000 low-level defendants, mostly racial minorities, sparing them from incarceration through drug and other specialty courts.

Burton-Harris said she would like to end cash bail for low level offenders if she is elected.

“This idea that we need cash bails to ensure community safety and to ensure folks are not a flight risk is just simply false,” she said.

Worthy, who is running for a  fifth term, is nationally recognized for her work to create and implement a system to get more than 11,000 abandoned Detroit rape kits tested.

Worthy said her resentencing efforts have freed juvenile offenders from lengthy prison sentences, and last week she announced plans to help obtain “wraparound” services for newly-exonerated individuals, as well as implementing a “community court” where low-level offenders would be sentenced to community service duties such as grass-cutting.

Worthy said she has been an “innovator and reformer” with programs aimed at diverting individuals out of the criminal system when the offense permits it.

She said she has forged state, national and federal relationships that have been crucial in obtaining grants for crime-fighting initiatives in her office.

“Experience is key especially in these times … especially for this job. This is not a job for the novice,” Worthy said. “It just isn’t.”

Political pundit Mario Morrow Sr., of Mario Morrow & Associates, said the effort to unseat Worthy is part of a national push by a “progressive movement” to vote out incumbent prosecutors.

But in Worthy’s case, it is undeserved because she has a proven record of fighting crime, he said.

“Kym Worthy is one of the best prosecutors in the country,” said Morrow. “I think they made a bad choice in going after her.”

“Kym Worthy is going to win Detroit and she’s going to win in (Wayne County suburbs),” he said. “Our county voters love Kym Worthy. I don’t see her having any problems getting re-elected.”

In other Wayne County races:

►Democratic Treasurer Eric Sabree is challenged in that party’s primary by Beverly Kindle-Walker and Angelo Brown. Anthony Wozniak of Livonia is unopposed on the Republican ballot.

►Democratic Register of Deeds Bernard Youngblood faces a primary challenge from Ricardo Moore of Detroit. Republican Parker Burns of Plymouth is alone on the GOP ballot.